Lieutenant Colonel Darling retired from the United States Marine Corps with just over twenty years of active duty service in October 2007. He flew Cobra attack helicopters in Desert Shield and Desert Storm during the first Gulf War and in Somalia, Africa in support of Operation Restore Hope. In June 1998, he was selected to fly as a presidential pilot with Marine Helicopter Squadron One and in October 2000, he was selected to work for The White House Military Office, Airlift Operations Department. It was in that capacity that, then Major Darling supported the President, Vice President and National Security Advisor in the Presidential Emergency Operations Center (PEOC) on September 11, 2001.

Bob graduated from Iona College, New Rochelle, NY with a BA in Economics in 1987. Upon graduation he was commissioned a 2nd Lieutenant aboard the USS Intrepid. In 2002 Bob attended the Naval Postgraduate School, Monterey, CA where he earned his MBA in Financial Management.

At the urging of family, friends, and colleagues to share his witness to American history, Bob wrote his memoir, “24 Hours Inside the President’s Bunker, 9/11/01: The White House. He continues to share his personal experience and knowledge of crisis leadership with many military, corporate, and university audiences nationwide. He is the President of Quantitative Analytics, LLC, an aviation operations and logistics consulting company located in Stafford, Virginia.

“Lt. Col. Darling's account of his participation in protecting our nation during the worst attacks in our history is gripping! It reminds us that this is not yet part of our history but still a present on-going threat. We can all learn a great deal from reading it.”

Webcast : Exploring 9/11 – The World Before and After

Robert J. Darling shares his experiences inside the White House on 9/11.

Lt. Col. Robert J. Darling, a former Marine and White House Military Office Airlift Operations Liaison Officer, was charged with organizing all logistical aspects of travel for the White House. His recent book titled “24 Hours inside the President’s Bunker” details his time in the President’s Emergency Operations Center on September 11, 2001. 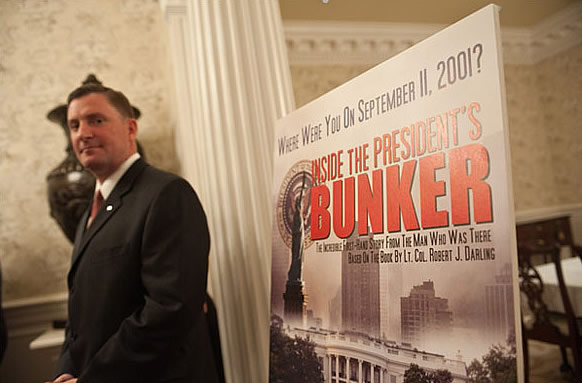 Visit msnbc.com for breaking news, world news, and news about the economy

Copyright 2021. Robert J. Darling. All rights reserved, worldwide.
Website design and hosting by MSW Interactive Designs LLC. We put the web to work for you!