Robert Darling will adapt his presentations to fit your organization's goals and needs.

On September 11th 2001, Lieutenant Colonel Darling was working in the White House Military Office and was initially tasked to coordinate airlift assets for the President’s evacuation to an undisclosed site. However, he was quickly recruited to provide his military expertise and became a key liaison between the Vice President, National Security Advisor and the Pentagon and worked directly with the National Command Authority to respond to the terrorist attacks.  Lieutenant Colonel Darling witnessed first hand the enormity of the crisis leadership decisions that were made that day on behalf of all Americans.

*Your audience will learn what the 9/11 Commission was initially blocked from knowing; who knew what, when, and what specific actions were taken by our nation's highest leader's to defend America.

*This presentation is insightful, inspirational, patriotic and will instill in every person the important role each of us play in supporting our warfighters as they continue to defend America.

A riveting speaker on the topics of crisis leadership and decision making, Robert J. Darling has impressed audiences all over the country. For more information about booking him to speak at your next event, simply complete the short form below or call him direct.

Scroll over images to enlarge 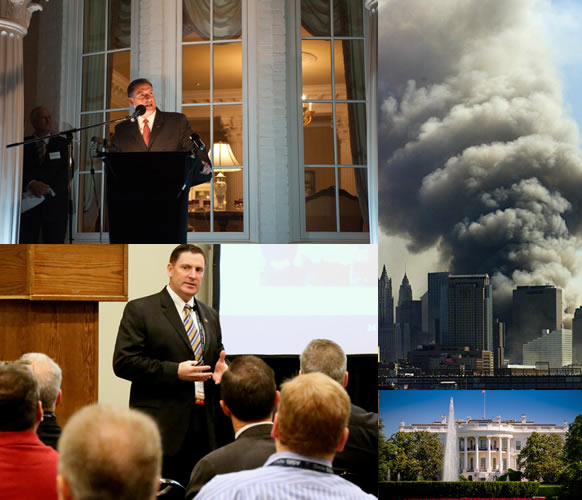 Copyright 2021. Robert J. Darling. All rights reserved, worldwide.
Website design and hosting by MSW Interactive Designs LLC. We put the web to work for you!